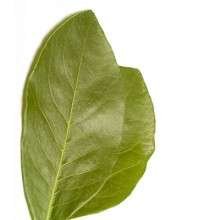 Growing up to 15m in height, the Bay Laurel, also known as sweet bay or the true laurel, belongs to the Lauraceae family. Its strong, spear-shaped leaves diffuse a powerful, aromatic scent when rubbed. The laurel is dioecious (unisexual), with male and female flowers on separate plants. The laurel is not to be confused with the Nerium oleander, which goes by a similar name in French, and is toxic in all its parts.

Indigenous to the Mediterranean basin, the bay laurel has been known since Ancient times. It also became sacred to the Cult of Apollo. Once used as a symbol of victory, laurel crowns were awarded to champions and competition winners. Furthermore, the word 'baccalaureat' originates from 'bacca laurea', which means bay laurel.

In terms of cooking, the bay laurel is used in many recipes, bouquet garnis, stews and pâtés in cuisine.

Please consult a doctor before taking any treatment or therapy orally.

In energy aromatherapy, bay laurel essential oil is associated with the throat chakra, or the 'Vishuddi', the fifth chakra. It is blue in colour and its element is ether.

Bay laurel essential oil stimulates the Vishuddi and increases concentration, inspiration and creativity. During exam periods, it helps calm anxiety and fear. It is an oil of champions and will help you push or even go beyond your limits.

Before an exam or physical challenge: Apply one drop at the base of the neck.
Possible synergies: Eucalyptus radiata

Flammable. Oral use only under medical advice. Keep out of reach of children. Unadvisable for children under the age of three, pregnant or lactating women. Do not apply to the skin before exposing oneself to the sun. Can be used in cooking. Do not apply neat to the skin.

The information given on this site regarding essential oils are only to be taken as indications. They do in no way, aim to replace any medical advice given by a qualified doctor. For all therapeutic uses, or if you wish to obtain more information on essential oils, please consult your doctor